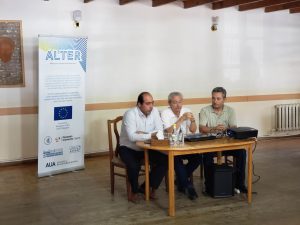 From June 24-27, ALTER project partners participated in tabletop exercises in each of the three pilot areas. The exercises were developed and carried out in close coordination with the RA Ministry of Emergency Situations. Members of the municipal government, private sector partners, and local NGOs all participated in the exercises.

ALTER’s three pilot areas – Sisian, Kapan, and Akhtala, all face similar but unique challenges with regard to possible dam failures resulting from a moderate to large earthquake. Complicating matters, any earthquake event would already heavily affect the local community, even without the threat of flooding due to a dam failure. The tabletop exercises were meant to present a possible scenario and allow local and government stakeholders to brainstorm ideas and be better prepared to respond to these events.

Captain Hovik Hovhannisyan, of the RA Ministry of Emergency Situations, created a unique scenario for each pilot site which included a detailed description of the event, number of casualties, damaged buildings and infrastructure, as well as an approximate time of dam breach. In addition to the scenario, researchers from the American University of Armenia and Bulgarian academy of sciences presented predictive flood models which show the arrival time and approximate flood depth stemming from a partial or full breach of upstream hydroelectric and mine tailing dams.

With these inputs, participants explained what their response would be. In addition, participants were able to point out possible inefficiencies and problems with traditional response mechanisms. These discussions will lead to updates to local and regional response plans that will be tested in small scale exercises in Fall 2019.