This is the second in a series of articles that focuses on the development of both the webGIS system and the complex hydrological models. The system empowers decision makers to better understand risks to their communities and create plans to mitigate and ultimately minimize risk. You can find the first article on data collection here. 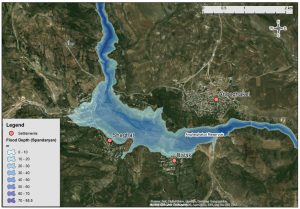 The first step in understanding modeling of floods caused by dam failures is to better understand how and why dams fail. Dams can fail due to faulty construction, flooding, mechanical failure, and other factors. A table was developed which assesses the types of failure that studied dams might be susceptible to. Once that is understood, specific models can be created that factor in these failure modes.

In the case of ALTER, there is a multi-risk component as it the project focuses on dam failures caused by earthquake, which would exacerbate or create the above failure modes. The type of dam failure and what material the reservoir holds greatly affect how the flow of materials will behave. Slightly complicating the modeling of such an event is complicated as the study areas contain dams that hold not only water, like the Geghi reservoir and Vorotan cascade, but also mine tailings such as those in the Geghanush and Mets Ayrum tailing management facilities.

It is only with the advanced development of computer processors that flood modeling has become a practical tool in disaster management. Even late in the 20th Century, large river systems, such as the Mississippi in North America, still used physical models in some cases to better understand flow. Models progressed from calculating flood at given cross sections of the river to dynamically modeling a flood as it flows over a given area.

The most basic flood models, known as 1D models, only calculate based on a cross sections of the flooded area. Factors such as flow rate and velocity are dependent on each cross section and limit the amount of information by computing averages of flood height and speed. The flood model to be used by ALTER is a 2D model, meaning it accounts factors of the flood as it moves along the surface created from elevation and land cover data. The figure on the right gives shows how the two models are different. The 1D model generates flood parameters such as flow and height at given intervals along the river. The 2D model provides those values across the entire surface of the model.

Both commercial and open-source flood modeling software is available, but from a sustainability and cost perspective, open source made sense for ALTER. ALTER was developed as a pilot project whose methodologies in public-private sector collaboration on mine failures can be applied in a broader context. Therefore, it also makes sense that the scientific modeling should also be repeatable by anyone using ALTER’s methodology.

In ALTER’s case, the HEC-RAS (Hydrologic Engineering Center’s River Analysis System) model, a well respected and reliable open source model was used to create the flood model. The model accepts all of the data developed by ALTER and provides models that can be tested and repeated in other contexts. It is hoped that some of ALTER’s private sector partners will be able to verify the results using open source software.

Below are the finalized models for each of the modeled regions. These can also be found at http://alter-flood-crm.aua.am/.

A key mandate of the ALTER project was the design and deploy a WebGIS system for use by decision makers in planning for risks posed by dam failures. Near or complete failures of hydroelectric dams and tailing storage facilities (TSFs) in recent years have underscored the need for planning for these fast-moving and often catastrophic disasters. In Summer 2019, ALTER partners from the AUA Center for Responsible Mining and their partners at the Bulgarian Academy of Sciences completed both comprehensive failure models for dams and TSFs in southern Armenia and the underlying web-GIS system to display the models for non-technical users. The models were also presented to decision-makers and will be used in upcoming field exercises in Fall 2019.