As posted briefly earlier this month, a delegation of ALTER project (Dr. George Drakatos, NOA, Mr. Evangelos Katsaros, EUC and Mrs Anna Maria Kafetzaki, NOA) visited Armenia from February 28th to March 2nd for a series of meetings. In this post, a full report on those meetings will be provided.

A downloadable version of the report can be found here.

ALTER members participated in the 2nd day of the PPRD East 2 initiative final event in Armenia, where they presented ALTER and heard about progress, final outcomes and potential continuation of PPRD East 2 Initiative later in 2019 or 2020.

One of the main issues discussed with the leading team of the PPRD East 2 initiative and the leadership of Ministry of Emergency (MES) of Armenian Republic was the potential of the ALTER project to act as a bridge, bringing PPRD EAST 2 outcomes closer to local communities in Armenia and preparing the ground for the PPRD EAST 3 initiative.

For the ALTER team it was clear that the outcomes of PPRD East 2 initiative remained at a strategic level and therefore had little impact on the local civil protection system and communities. Due to its focus, but also due to gaps in communication campaign, cooperation with the civil protection system, local communities and private sector entities was not satisfactory. Fortunately, these are exactly the objectives of the ALTER project and all its main events (table top and on field exercises, final conference and MOUs of public – private sector partnerships).

There was an initial agreement by both projects to formalize cooperation following the termination of PPRD East 2 and through the finalization of ALTER.

On March 1st, a meeting in Armenia’s Ministry of Emergency (MES) took place to discuss the major events of ALTER (officially embraced by the new Armenian Government that will support them operationally and by all

available means). All operational officers of MES and the National Emergency Operational Center were present -see also attached list of participants- and a detailed discussion drafted the framework of cooperation. The main meeting conclusions were as follows: 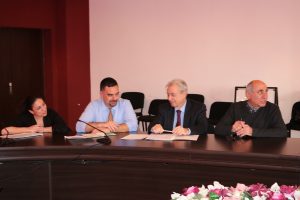 The Deputy Minister of Ministry of Emergencies and the Operational Leadership of MES requested an additional meeting with ALTER project partners(Dr. George Drakatos and Mr. Evangelos Katsaros) in May 2019 – one month before the launch of major ALTER events. During these events, the cooperation between private companies, MES and local communities will be further enhanced. Moreover, MES would like the proposed May 2019 meeting to include elements of the PPRD East 2 Initiative framework, to make them more visible at a local level.

The ALTER management team considers the May 2019 meeting to be essential. However, a consultation with the European Commission will be necessary prior to that meeting. A meeting in Brussels with the ALTER project officer, other European Commission Officials and PPRD East 2 Commission team could prove fruitful. ALTER will present in detail the planning of major ALTER EVENTS and the progress in Public – Private sector cooperation and the Commission will guide ALTER team on inclusion of elements from PPRD East 2 activities to ALTER events (to be tested) and what the Commission expects from Public – Private Sector partnerships and the potential of using ALTER activities as leverage for further investments / activities in the pilot areas of Armenia. The are also interested in how ALTER outcomes can be more transferrable to other sectors of the Armenian economy and other countries of the South Caucasus.

On March 1st and March 2ndALTER’s management team met with ARNAP and AUA (ALTER Armenian partners) to discuss project implementation progress and the need for a modification request to reflect the actual costs and needed activities not initially foreseen. That modification request will reach the Commission in March 2019. Some examples of these modifications are:

The details of installing monitoring equipment in one dam have officially been settled as well as the cooperation with the private company, which will also invest in extra equipment. Moreover, the monitoring system will be upgraded into an early warning system for the Kapan pilot area, using elements of a system that have been donated to ARNAP from another initiative, giving added value to ALTER, but mostly to local communities.

Consultation with the Commission will be necessary to clarify the issue of using ALTER as a leverage for exploitation of extra resources and attracting further investments. That is the intension of Armenian authorities, and the proper manner to handle the situation will need further input from the Commission.